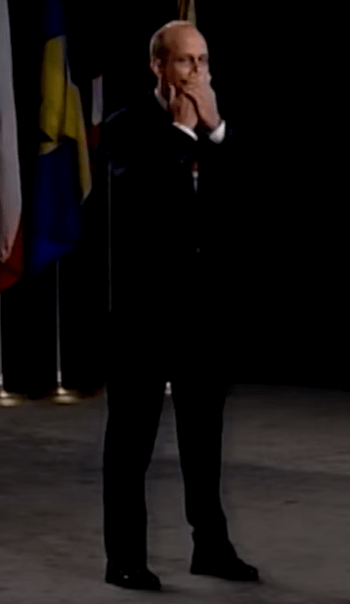 Several times in the past 50 years, I’ve heard the old adage, “Some things are better left unsaid!” It means that some thoughts SHOULD NOT BE VOCALIZED…usually because it could offend listeners or get the speaker in trouble. That may very well be true, but when you’re delivering a presentation…especially telling a story…that is NOT always the best advice.

When delivering a presentation or telling a story word selection is vital. Our language must be clear (clarity, clarity, clarity!) and easy to understand and follow. That’s a principle that I’ve practiced and taught for years. However, it’s CRITICAL to understand the power of what the audience SEES during your presentation. Your body, your face, and your movement can magnify and reinforce your words. That’s another principle that I’ve practiced and taught.

However, here’s a thought. At times, your body, your face and your movement can REPLACE your words…to great effect. Think about your stories. As you share your stories, it’s quite likely that you set the atmosphere, introduce characters, and take us through their experiences. Let’s create a simple example: A 10-year old boy is sitting at the table refusing to eat his vegetables and his mom asks why. You would not be alone if, as you tell the story, you say something like, “He scrunched up his face as he looked up at her and said, ‘It’s GROSS mom!'” making a disgusting face as you deliver the boy’s words with child-like disgust. There’s NOTHING wrong with that. In fact, using the boy’s voice and making a face is EXACTLY what I teach speakers to do.

Here’s where the old adage comes into play. As you tell the story, DO NOT SAY “He scrunched up his face as he looked up at her and said” Instead, MAKE THE FACE, LOOK UP as if you were a 10-year-old looking up his mother, and IN A CHILD’S VOICE, say, “It’s GROSS, mom!” The DESCRIPTION of the scene is better left unsaid. Let the ACTION tell the story.

Here’s my suggestion: Review your stories and look for places where the action would tell the story better than your words would. Revisit scenes where you DESCRIBE the action, and determine if would be more effective to simply SHOW the action. Remember, while it’s always helpful to describe scenes, characters and interactions, sometimes it’s best to let the ACTION tell the story, because some things are BETTER LEFT UNSAID.